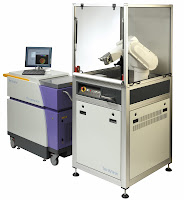 Dissolution stability over the entire shelf life duration is of critical importance to ensure the quality of solid dosage forms. Changes in the drug release profile during storage may affect the bioavailability of drug products. This study investigated the stability of a commercial tablet (Lescolr XL) when stored under accelerated conditions (40 oC/75% r.h.). Terahertz pulsed imaging (TPI) was used to investigate the structure of the tablet coating before and after the accelerated aging process. The results indicate that the coating was reduced in thickness and exhibited a higher density after being stored under accelerated conditions for four weeks. In situ magnetic resonance imaging (MRI) of the water penetration processes during tablet dissolution in a USP-IV dissolution cell equipped with an in-line UV-vis analyzer was carried out to study local differences in water uptake into the tablet matrix between the stressed and unstressed state. The drug release profiles of the Lescolr XL tablet before and after the accelerated storage stability testing were compared using a “difference” factor ∫1 and a “similarity” factor ∫2. The results reveal that even though the physical properties of the coating layers changed significantly during the stress testing, the coating protected the tablet matrix and the densification of the coating polymer had no adverse effect on the drug release performance.

TeraView Limited is the world's leader in the design and manufacture of terahertz (THz) products to the pharmaceutical, security, medical and materials characterisation markets. Our products continue to yield many ground-breaking applications such as tablet coating thickness and uniformity, cracks, defect analysis, foreign materials and analysis of solid-state structure to be exploited by our customers. Based in Cambridge UK, we have a global client base and a highly-skilled workforce.

You will have 3 years or more industry experience as a development engineer in scientific or engineering application environments. You will have worked within a formalised Quality System framework, with experience of scientific instrumentation. You must be able to demonstrate a track record of instrumentation or scientific software architecture design. You will be a self-starter with a positive attitude and a proven ability to work in small multi-disciplinary teams.

Reporting to the Technical Development Team Leader, your responsibilities will include:

·         Design and development of software in support of instrumentation related to our terahertz systems, either individually or as part of a wider team

·         Hand-on work in prototyping and implementation of proposed solutions

The successful applicant will have:

·         The flexibility to develop across multiple languages / platforms

·         A scientific or engineering background

·         Design and development of scientific measurement equipment, for example spectrometers or imaging systems


If you think you have the skills and qualities we need, please send your CV, with a covering letter, outlining your current role and remuneration to:

TeraView offers an excellent salary and benefits package, along with the opportunity for highly-motivated staff to work together and shape the development of products in one of the newest and most exciting areas of technology. We are an equal opportunities employer and pride ourselves on our diverse workforce. For further information and background on the company, please visit our website on: www.teraview.com

Posted by TeraView at 11:33 No comments:

The Society for Applied Spectroscopy (SAS) UK Regional Section will host its 3rd Annual Technical Meeting Graphene Spectroscopy on Tuesday 29th October 2013. This one day meeting will be held at Trinity Hall in Cambridge and will focus on recent advances in the characterization of graphene and two dimensional crystals by spectroscopic methods.

Graphene, thanks to its unique structural and electronic properties, has been called the “miracle material” of the 21st Century. Its isolation in 2004 has sparked a considerable scientific activity that has now established a broad international community with interest ranging from fundamental studies to applications in different fields e.g. composite materials, (opto)electronics, energy, etc. Graphene is just the first of a new class of two dimensional (2d) materials, derived from layered bulk crystals.


Studying and understanding the structure of graphene and 2d crystals is therefore of utmost importance for materials optimization and devices integration. This timely meeting strives to bring together international stakeholders in the field, to give perspectives on the current status of graphene spectroscopy.


The speakers will be:

[The scientific program for the meeting has been co-organised by Francesco Bonaccorso (CNR-IPCF (Italy) and CGC, Cambridge University) and John Chalmers (SAS UK Regional Section.]

For registration details for this meeting or for more information, please email:
John Chalmers at: vibspecconsult@aol.com or visit: https://sites.google.com/site/sasukregion
Posted by TeraView at 11:29 No comments:

We have measured the terahertz-frequency optical conductivity of the epitaxial inverse spinel NiCo2O4 films grown at different temperatures. The low-temperature-grown film exhibits a metallic behavior with ferrimagnetic ordering, while the high-temperature-grown film shows greatly suppressed magnetization and insulating behavior. Both films exhibit band-like coherent conduction at intermediate temperatures, albeit with very different carrier densities consistent with the proposed models of cation valencies in this mixed-valence material. Both films also display a crossover to incoherent transport at low temperatures, indicating a disorder-induced tendency toward localization. 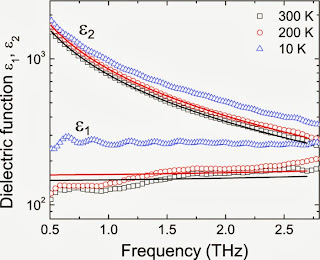 The real (ε1) and imaginary (ε2) parts of the measured dielectric function of the NCO300 film.

Two different spectrometers were used for this study: a home-built spectrometer THz-TDS, and a commercial spectrometer mede by Teraview. TeraView's TPS Spectra 3000 was used to perform measurements.

Posted by TeraView at 13:11 No comments:

Email ThisBlogThis!Share to TwitterShare to FacebookShare to Pinterest
Labels: Spectra 3000

To prepare and characterize the co-crystal of dipfluzine and benzoic acid. To investigate the feasibility of the co-crystal for improving solubility and a faster dissolution rate in vitro and evaluate the bioavailability and tissue distribution of co-crystal in vivo.

Results of PXRD and DSC identified the dipfluzine–benzoic acid co-crystals were formed with a molar ratio of 1:2. The IR, Raman, and ssNMR spectra verified the formation of O-H · · · O and O-H · · · F hydrogen bonds. The complex constant, K, was evaluated to be 109 orders of magnitude with ΔrG < 0. The co-crystal solubility, the rate of drug dissolution and the relative bioavailability were approximately 500 times, five times and double that of dipfluzine, respectively. Increased solubility of co-crystal did not reduce distribution in the brain; the mean concentrations in the brain increased, but the differences had no statistic significance (p > 0.05).

The co-crystal of dipfluzine–benzoic acid improved the physicochemical properties of dipfluzine, such as solubility and dissolution rate. Furthermore, the increased relative bioavailability of co-crystal indicated the potential use in further clinical study.

To learn more about TeraView's product range register for free at http://www.teraview.com/info/contact-us.php
Posted by TeraView at 01:00 No comments: