In recent years the technology enabling terahertz imaging and spectroscopy has progressed remarkably. Techniques that were previously confined to the laboratory are now finding applications in industry.
The International Terahertz Conference will bring together experts in the development of Terahertz techniques, as well as those applying the technology to industrial applications.
The conference will focus on recent advances in the generation and detection of Terahertz radiation as well as its use for imaging, spectroscopy and industrial applications. At the International Terahertz Conferenceyou will have the opportunity to meet and talk with leading experts in the field. If you have already a particular application in mind we could discuss this prior the conference.
We look forward to your visit, because
„what is to change the world tomorrow, has to be developed today“

Posted by TeraView at 16:02 No comments:

SIGNAL MODELING IN THE FAR-INFRARED REGION FOR NONDESTRUCTIVE EVALUATION APPLICATIONS

Issue Date: 23 June 2011
.
ABSTRACT
Chien-Ping Chiou, David K. Hsu, Dan Barnard, Kwang-Hee Im, and R. Bruce Thompson
Center for Nondestructive Evaluation, Iowa State University, Ames, Iowa 50011
Terahertz radiation (a.k.a. T-ray) has emerged as a powerful inspection technique in recent years. It extends into the lower region of far-infrared in the electromagnetic spectrum, and has been proven very effective in many NDE applications. T-ray is particularly useful insome areas where accessibility is difficult or even not possible for other conventional NDE methods. Here we report a modeling effort of T-ray signal in one such application: the detection of “hidden delamination”, a special situation that a delamination was shadowed by another. This special case was experimentally simulated by two parallel saw-cuts in glass composites. In this paper, we also explore the feasibility of combing T-ray and Fourier transform infrared spectroscopy using a unified least-squares scheme for material characterization. ©2011 American Institute of Physics

http://onlinelibrary.wiley.com/doi/10.1002/jps.22339/abstract
The potential applications of terahertz (THz) spectroscopy in the analysis of pharmaceutical products in their crystalline state have prompted the need for a more thorough understanding of the fundamental vibrational motions contributing to the THz spectra. The detection of variations in crystal structure and the reliable assignment of observed THz absorption features can be aided by the use of solid-state density functional theory (DFT). In this study, solid-state DFT with periodic boundary conditions was used to simulate the crystalline structure and assign the experimental THz spectra (10–90 cm−1) of the enantiomerically pure and racemic forms of the common pharmaceutical compound ibuprofen. The results clearly demonstrate the capabilities of DFT methodologies to accurately reproduce the THz spectra of large complicated molecular systems and provide insight into the internal and external vibrational motions that form the basis of THz spectroscopy. © 2010 Wiley-Liss, Inc. and the American Pharmacists Association J Pharm Sci 100:1116–1129, 2011
Posted by TeraView at 14:08 No comments:

Dr. Gianluca Pastorelli from University College London, in collaboration with TeraView Ltd., is giving a talk at Lacona IX concference on 3D THz imaging of Heritage Objects. The talk will be given at the British Museum, London, at 12.50 on Friday 9th of September.

All measurements on heritage objects analysed were done at TeraView Ltd. using a Spectra3000.
More information on the conference schedule can be found here. 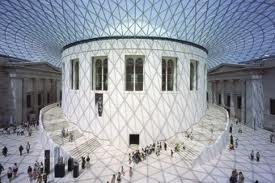 
In the past few years, the way for Terahertz (THZ) technology into heritage science and conservation has been paved slowly but securely [1]. THZ radiation occupies the band between far-IR and microwaves (100 µm – 1 mm ~ 0.3 – 3 THz) and its recent advance is related to development of the necessary radiation sources and detectors.


The particular advantage of THZ radiation in comparison to other optical techniques is that it induces interactions between large molecules thus rendering itself particularly suitable for characterisation of macromolecular and supramolecular structures. THZ spectroscopy has been used for determination of glass transition temperature of polymers [2], has recently been shown to contain quantitative chemical information on polymeric materials [3] and spectral libraries have been built of a number of historically significant pigments [1].
In this work, we present a state-of-the-art THZ pulsed semiconductor-based imaging system developed specifically to monitor the thickness, uniformity and density of laminar and coated structures and to identify structural features such as cracks, dislocations and delaminations [4]. The emitter and receiver are based on a femtosecond pulsed laser system working in the range of 0.06 THz – 3 THz. The resolution of the system depends on the wavelength employed, and is typically in the range of several 10 µm.
The system operates on the principle of reflection of THZ pulses on (subsurface) phase boundaries, i.e. boundaries between materials with different refractive indices. Since both the emitter and the detector can be moved across a sample in the x-y direction, a 3D image of an object can be obtained.
Several case studies were selected to explore the capabilities of 3D THZ imaging, particularly plastic heritage objects. Using a degraded cellulose acetate (CA) negative, it was possible to image the typical delaminations observed as a consequence of advancing degradation. On other types of CA objects, depth distribution of cracks can be observed very effectively, while on polyurethane foam objects, the degradation process can be followed by imaging the cell shape and structure.
Due to its properties, combining a significant depth of penetration into opaque organic materials with a significant amount of chemical information, THZ imaging could significantly improve the present practice of structural and chemical monitoring of heritage objects of organic origin.
1. K. Fukunaga: Innovative Terahertz Spectroscopy and Imaging Technique for Art Conservation Science, e-Cons. Mag. no. 10, 2009, 30-42.
2. C. Jansen, S. Wietzke, O. Peters, M. Scheller, N. Vieweg, M. Salhi, N. Krumbholz, C. Jördens, T. Hochrein, M. Koch: Terahertz imaging: applications and perspectives, Appl. Opt. 49, 2010, E48-E57.
3. T. Trafela, M. Mizuno, K. Fukunaga, M. Strlič: THZ spectroscopy and chemometrics for quantitative characterisation of historic paper, LACONA IX, 2011.
4. L. Ho, R. Muller, K. C. Gordon, P. Kleinebudde, M. Pepper, T. Rades, Y. Shen, P. F. Taday, J. A. Zeitler: Monitoring the Film Coating Unit Operation and Predicting Drug Dissolution Using Terahertz Pulsed Imaging, J. Pharm. Sci. 98 (2009) 4866-4876.
Posted by TeraView at 13:00 No comments:

Email ThisBlogThis!Share to TwitterShare to FacebookShare to Pinterest
Labels: Conferences and events

"... Recently TeraView together with an industry partner developed a Terahertz “TDR” called the Electro Optical Terahertz Pulsed Reflectometry (EOTPR) promising resolution of <10 μm....The EOTPR application on the real failure unit was presented at Electronic Components and Technology Conference (ECTC), 2010, and one of the case studies showed that the conventional TDR analysis was not able to isolate the defect, but with EOTPR, there was a difference between the waveform of the passing and failing unit..."

Failure analysis plays a major role in all areas of the semiconductor company especially during product development cycle, 1st silicon stage, or in wafer processes and fabrication as well as assembly and package development. Different companies have different FA flows but all FA steps will need to start with fault isolation. Fault isolation is the step to narrow down the focus area of a failing component or product to a manageable area that will allow us to (a) improve success of finding the defect that is causing the failure and, (b) significant speed up turn-around time for analysis.
This paper provides an overview of all the available failure analysis on fault isolation methodologies and tools, for device/product level and expanding to package/assembly and PFA level isolation. The aim of the paper is to provide sufficient depth to each topic including some case studies to emphasize the key points related to each methodology. The tutorial will also cover some future directions/roadmaps.
http://www.sciencedirect.com/science/article/pii/S0026271411002605#s0005
Posted by TeraView at 11:34 No comments: