In this study calendering is used as a downstream technique to shape monolithic co-extruded fixed-dose combination products in a continuous way. Co-extrudates with a metoprolol tartrate-loaded sustained-release core and a hydrochlorothiazide-loaded immediate-release coat were produced and immediately shaped into a monolithic drug delivery system via calendering, using chilled rolls with tablet-shaped cavities. In vitro metoprolol tartrate release from the ethylcellulose core of the calendered tablets was prolonged in comparison with the sustained release of a multiparticulate dosage form, prepared manually by cutting co-extrudates into mini-matrices. Analysis of the dosage forms using X-ray micro-computed tomography only detected small differences between the pore structure of the core of the calendered tablet and the mini-matrices. Diffusion path length was shown to be the main mechanism behind the release kinetics. Terahertz pulsed imaging visualized that adhesion between the core and coat of the calendered tablet was not complete and a gradient in coat thickness (varying from 200 to 600 μm) was observed. Modulated differential scanning calorimetry and X-ray diffraction indicated that the solid-state properties of both drugs were not affected by the calendering procedure. 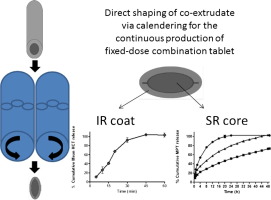 Posted by TeraView at 20:23 No comments: