This workshop aims at bringing together new and existing terahertz instrumentation users. It is an opportunity to share knowledge and understating of the technology.
THz systems will be used for hands on demonstration of the equipment. Data processing and analysis techniques will be also extensively discussed.
The workshop will span throughout two days, with the opportunity of remaining a third day on –site for further hands-on demonstrations.
Throughout the two days there will be extensive opportunities for the users to discuss their projects in detail and to establish links to experts in this field.
Topics will include:
•Introduction to terahertz spectroscopy
•Data Analysis
•Terahertz imaging
•Hands-on use of terahertz equipment
Anyone wishing to to learn more about terahertz applications should attend this workshop!

Description:The “International Forum on Terahertz Spectros­copy and Imaging” especially fosters the exchange of knowl­edge and experience between academics and indus­try
in this exciting and rapidly developing field.


Background and Motivation:
Nowadays Terahertz technology has proven to be a valuable tool for applications in diagnostics, measurement and testing.
The following renowned experts in the field of Terahertz Technology have con­firmed invited to give invited lectures to the forum:

TeraView expands customer base in Korea

TeraView Cambridge, United Kingdom – 23 June 2011
TeraView (http://www.teraview.com/), the pioneer and leader in Terahertz solutions and technology, has secured a key order from the Gwangju Institute of Science and Technology (GIST) in Korea.
GIST is one of the country’s most prestigious research institutes, ranking first in the number of publication per staff in recent surveys. TeraView will supply its TPS Spectra 3000 system to GIST for terahertz research and materials characterisation. TeraView’s system was chosen over that of its competitors due to its ease of use, superior performance and the company’s track record.
The sale adds to TeraView’s growing installed base in the Korea, and helps strengthen its position in the growing Asian market.
Dr Don Arnone, TeraView’s CEO stated ‘Yet another sale of the TPS spectra 3000 in Korea adds to the growing list of prestigious customers for this product in the region. This sale is also of wider strategic benefit as Korea increasingly serves as a technology leader for the Asia-Pacific region. When combined with other orders and our strong pipeline this order has helped to give us a great start to our new financial year’
Posted by TeraView at 15:45 No comments: 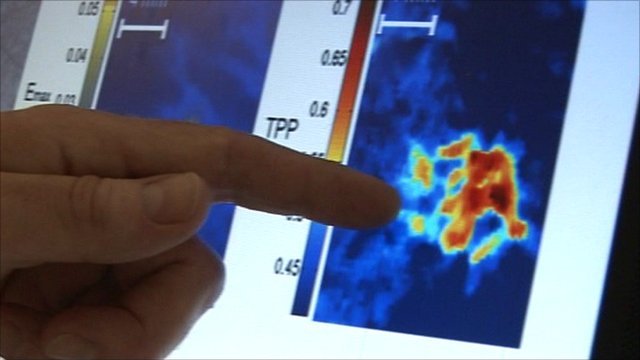 Click to play
An explanation of how terrahertz energy can capture signs of melanoma below the skin
Leicester's De Montfort University has won £75,000 for research into improving the early diagnosis of skin cancer.
Researchers hope a new malignant melanoma detection tool will lead to hundreds of lives being saved.
The device use pulses of terahertz energy, similar to infrared light, to take images below the surface of a patient's skin.
The project has been funded by Leicestershire and Rutland-based charity Hope Against Cancer.
Over the next three years, the university will work in collaboration with dermatologists at Leicester Royal Infirmary to collect data and move towards holding clinical trials.
'Catch it early'
Dr Geoff Smith, who is leading the project with Dr Huseyin Seker, said the new device would be an additional tool to existing examination techniques.
"It's all about trying to get the treatment done early, because if you don't catch it early then you can be in serious trouble," he said.
Dermatologists currently examine suspected melanoma using the naked eye and an optical dermatoscope, which uses a polarised light source.
Malignant melanoma is the most serious form of skin cancer, originating in cells that produce skin pigmentation.
It represents 5% of diagnosed skin cancers, but accounts for 90% of subsequent deaths, according to Cancer Research UK.
Posted by TeraView at 12:56 No comments:

TeraView will be posting news and updates on this blog!
http://www.teraview.com/
Posted by TeraView at 12:42 No comments: